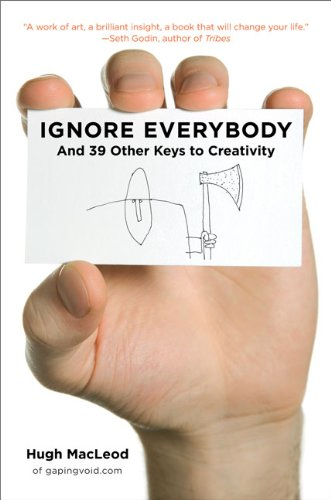 Just finished Hugh MacLeod‘s delightful little book, Ignore Everybody, And 39 Other Keys To Creativity. It sat on my bookshelf for months, waiting for that little impulse for me to engage with it. I see now it was published in ’09, so I’m a late comer, but it hasn’t aged a bit in its value. Hugh’s 159 pages are a masterful work of brevity and pointedness, and they’re full of crisp bits of advice that I already find myself turning back to every few days.

Hugh is a cartoonist and author of the blog, gapingvoid.com, and two other books, Evil Plans, and Freedom Is Blogging In Your Underwear. He’s known for his business card-format cartooning and insight on marketing, the Internet, and the pursuit of a sustainable creative life. I love the refreshing take on the life struggles of anyone with a creative urge, which amounts to a heck of a lot of people. In contrast to so many things I’ve read that seem to talk about following your dreams no matter what, Hugh’s angle is about stripping all the distractions of expectation away and just honestly and simply pursuing something that moves you, because in the end, that’s all you may get out of it.

It’s not that he’s discouraging us from pursuing our dreams. The wisdom of pursuing something for the sheer sake of the self-discipline which must be exercised in doing it at all is not a new idea, but it IS refreshing to read and ponder in short, inspiring quips accompanied by some thought-provoking and funny cartoons. And that’s what makes Ignore Everybody a fun, quick, and meaningful read.

Ignore Everybody pleads with us, using the stealth of humor, to stop making big plans, listen to our intuitive self, and just do. Nike for the creative spirit. As he closes, Hugh writes,

It’s good to be young and full of dreams. Dreams of one day doing something “insanely great.” Dreams of love, beauty, achievement, and contribution. But understand they have a life of their own, and they’re not very good at following instructions. Love them, revere them, nurture them, respect them, but don’t ever become a slave to them. Otherwise, you’ll kill them off prematurely, before they get the chance to come true.

Basically, he’s saying, “keep your day job,” and make peace between it and your other pursuits. A lot of great ideas have crashed on the rocks of all-or-nothing. I’ve been there. When I finally wrote out the silly little tune that had been swimming in my head for months while living in Manhattan in 1985, I didn’t think Moose In My House would amount to anything. I just wrote it and recorded it because I needed to. That was enough, along with the pleasure of having a few friends laugh at it. Five years later, living in Houston, friends encouraged me to enter it in a novelty song contest on a big FM morning show hosted by John Lander. It won, landed me a $1000 cash prize which paid that month’s rent, and quickly spread to other stations around the country as a bootleg. I got all hurried about it, rush wrote and recorded more songs, and tried to get a record deal. ALL OR NOTHING!

Nothing. It was too weird, some of it was hurried and half-ass, some funny, some clearly not. A guy from Disney said, “The music is awesome but the lyrics make no sense at all. You need a lyricist.” A guy in Nashville said, “We already have Ray Stevens. Why would we need this?” And so it went in one conversation after another, when people would see me at all. I finally released the idea in frustration and went on to other things. I had given the power over to The Man (which in my case really just meant expectations). Expectations are very good at creating one thing, disappointment. In retrospect I should have just kept writing tunes for the original reason I wrote Moose In My House. Because it wanted me to. I needed to hone the craft. One burst of inspiration did not necessarily equal an assembly line-like repeatable skill. But who knows what might have come of it if I had just continued writing, learning, refining? Maybe, eventually, a recording deal (which, today, is a hilarious concept), or nothing to do with song writing at all, but something entirely different and just as enjoyable.

I think this is what Hugh is talking about in Ignore Everybody. Shut up all the chatter. Hang quietly with the idea. Get to know it, as you would a new friend, or a stray cat that keeps coming to your window sill. It takes time. Anything worth it takes time. I think I’m gonna write a song about this.